Spanning 459.8 square miles and home to many different cultures and people, Cuyahoga County is the most populous county in the state of Ohio. However, it wasn't always this way.

The area that became Cuyahoga County was inhabited as early as 2000 BC. Between 800 BC and 1000 AD, the Adena and Hopewell Mound Builders flourished here. Much later, the Wyandot, Huron, Shawnee, Miami and Delaware tribes lived in the area, leaving evidence of their cultures that still remains. It was their word for "crooked" that gave the Cuyahoga River its name.

As Europeans began to settle North America and move west, the land on the southern shore of Lake Erie was given to Connecticut by King Charles II of England in 1662. Perhaps it was the inability of the English to envision the vastness of the New World that lead to some curious division of property. The Warwick Pact of 1635, for example, was a land grant to English colonists for an area from Narragansett Bay to the Pacific Ocean. The strip of land, however, was merely 73 miles wide. Although the charter for the land granted to Connecticut ensured self-government, Connecticut declared its independence in 1775 and, after the American Revolution, gave up its claim to all western lands except for the Western Reserve, a strip of land that ran for 120 miles along the shore of Lake Erie from the Pennsylvania border to what is now Sandusky.

Under the Northwest Ordinance in 1787, the Western Reserve was absorbed into the Northwest Territory. In order to acquire money to start its school funds, Connecticut sold the reserve to the Connecticut Land Company in 1796 for 40¢ an acre. With a group of 50 men and two women, General Moses Cleaveland was hired to survey the area.

After arduous travel, the group reached Buffalo where they encountered Native Americans who had been living along the lakeshore. For the toll of $1000, two beef cattle and 100 gallons of whiskey, the party was allowed to proceed safely. They reached the Conneaut River on July 4, 1796, the 20th anniversary of the birth of the United States. Cleaveland and a few others then took to canoes to explore the coastline to the West. When they came to the "crooked river", they knew they had found a place where a city could be planned and planted. They mapped a village, New England style, around a green common - the present Public Square. The map drawn by Amos Spafford included Superior, Ontario and Huron streets, though Euclid Avenue was still a narrow trail. The name for the town was to be Cleaveland (though the first "a" would later be dropped due to a newspaper misprint in 1831). After the survey, Cleaveland returned to Connecticut to practice law. 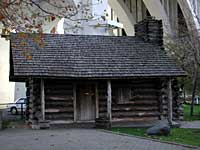 Subsequently, the Western Reserve became a part of the newly created Ohio territory. By January 1803, Ohio's population exceeded the required 60,000 for statehood and on 1 March of that year was granted status as the 17th state. During its early development, one of the most important and vexing problems of Ohio was the formation of new counties. As the state was sparsely populated, Ohio created several large "parent" counties and would form new counties from these based upon population numbers. Trumbull County was the first created in the Western Reserve region and encompassed all of its territory. In 1806, Geauga County was formed from Trumbull and on 10 February 1808 (and formally on 7 June 1808), the Ohio General Assembly formed Cuyahoga County from Geauga. It was not until 16 January 1810 that the new county became fully independent from Geauga. This became effective on 1 May 1810. The Village of Cleaveland (as it was called prior to 1831) was selected as the county's seat. 1810 also saw county business being first conducted at Public Square as well as the election of Jabez Wright and Nathaniel Doane, the county's first two commissioners. Philo Taylor joined this group in 1813, forming a triumvirate of commissioners, a system that has remained in place since. In addition to this, a two-story frame combination jail, courthouse, and administration building were built in 1813 as well.

In addition to its present borders, Cuyahoga County, when officially formed, included parts of modern-day Lorain, Huron, and Lake Counties. By the time Cuyahoga became administratively separated from Geauga County, provision was already being made to detach the counties of Lorain and Huron. Huron became a county in 1815, while Lorain became a county in 1824. The new borders, however, put one community at a disadvantage. The Lennox Township was split between Lorain and Cuyahoga. After appealing to the general assembly, the community of the township was reunited with Cuyahoga County in 1827 and changed its name to the Olmsted Township.

The county experienced another major border adjustment with the formation of Lake County in March 1840. Although the greatest portion of the new country was ceded from Geauga County, the Willoughby Township was separated from Cuyahoga County and added to Lake as well. Still, the boundary between Geauga and Cuyahoga was not clearly defined until 1843, when it was decided that Geauga would transfer Chagrin Falls to Cuyahoga in exchange for a strip of land from the Orange Township. Since the time of this final adjustment, the borders of the county have borne no further changes. 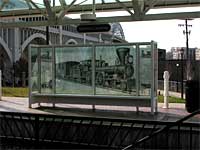 Within the county itself however, municipal borders changed dramatically until roughly the 1930s. The evolution of these cities, villages, and townships would eventually lead to the present-day municipal borders of the county. Early on, disputes over land and annexations were direct sources. Such situations often marred the early history of such cities as Beachwood. Cleveland too had its share of disputes. Its most famous was a dispute with its rival Ohio City (today part of Cleveland itself) over the Columbus Street Bridge, the first permanent bridge over the Cuyahoga River. Ohio City residents were angered by the construction of the bridge because its route would allow visitors to go directly into Cleveland and bypass Ohio City. A skirmish erupted between Ohio City rebels and a group of armed Cleveland militiamen. Fortunately, the county sheriff arrived to end the violence and make several arrests. If the conflict had continued, however, it may have erupted into a full-scale war.

As Cleveland's prosperity began to rise, so did the county's. Borders of the municipalities in the county began to see dramatic change, especially with the expansion of Cleveland. Facilities in the county also began to grow and expand. In 1828, 1858, 1875, and 1912, new courthouses were built. Moreover, a new administration building was built in 1955, a new Justice Center in 1976, and an additional jail in 1995.

Like other industrial cities, Cleveland saw a steady decline in the 1960s and more people began moving to other municipalities in the county. Cleveland's suburbs such as Bay Village, Cleveland Heights, Euclid, Fairview Park, Garfield Heights, Lakewood, Parma, Rocky River, and Shaker Heights began seeing rapid growth. Additionally, Cleveland's declining income resulted in regionalizing some of its assets throughout the entire county. Complex regional needs are among the challenges that the county government faces today. However, Cleveland has begun making a comeback and only time will tell when it may make a complete turnaround. Cuyahoga County, meanwhile, remains the most populous and urbanized county in the state of Ohio.