The “Mistake on the Lake” nickname is a thing of the past for Cleveland, a city on the rise. In the past few years, Cleveland shone under the national spotlight during the 2016 Republic National Convention, the Cleveland Cavaliers won their first NBA Championship, and the Cleveland Indians made it to the World Series, all of which garnered significant national attention. Clearly we’re not the only ones who think Cleveland is the place to be, in 2018 Cleveland was named to National Geographic’s “Best of the World” list. 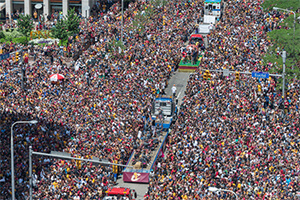 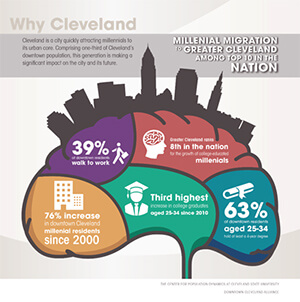 Downtown Cleveland’s biggest advantage is its ability to help employers attract and keep highly-educated workers. Cleveland’s recent influx of highly-educated millennials, specifically those aged 25 to 34, has been so steady that the city now ranks eighth nationally in rate of growth for this demographic.

Cleveland also boasts the fifth fastest growing population of workers with advanced degrees, ahead of “brain hubs” such as Chicago, Seattle and Austin. According to Downtown Cleveland Alliance’s State of Downtown 2016 report, 41.1% of downtown residents hold a four-year or advanced degree. This influx of highly-educated millennials Cleveland stems from investment, research, and development of the city and the city’s strong higher education and medical industries. According to the Center for Population Dynamics at Cleveland State University’s Mapping Adult Migration in Cleveland, Ohio report, half of the graduate or professional degree holders in Cleveland are currently employed in one of those two industries.